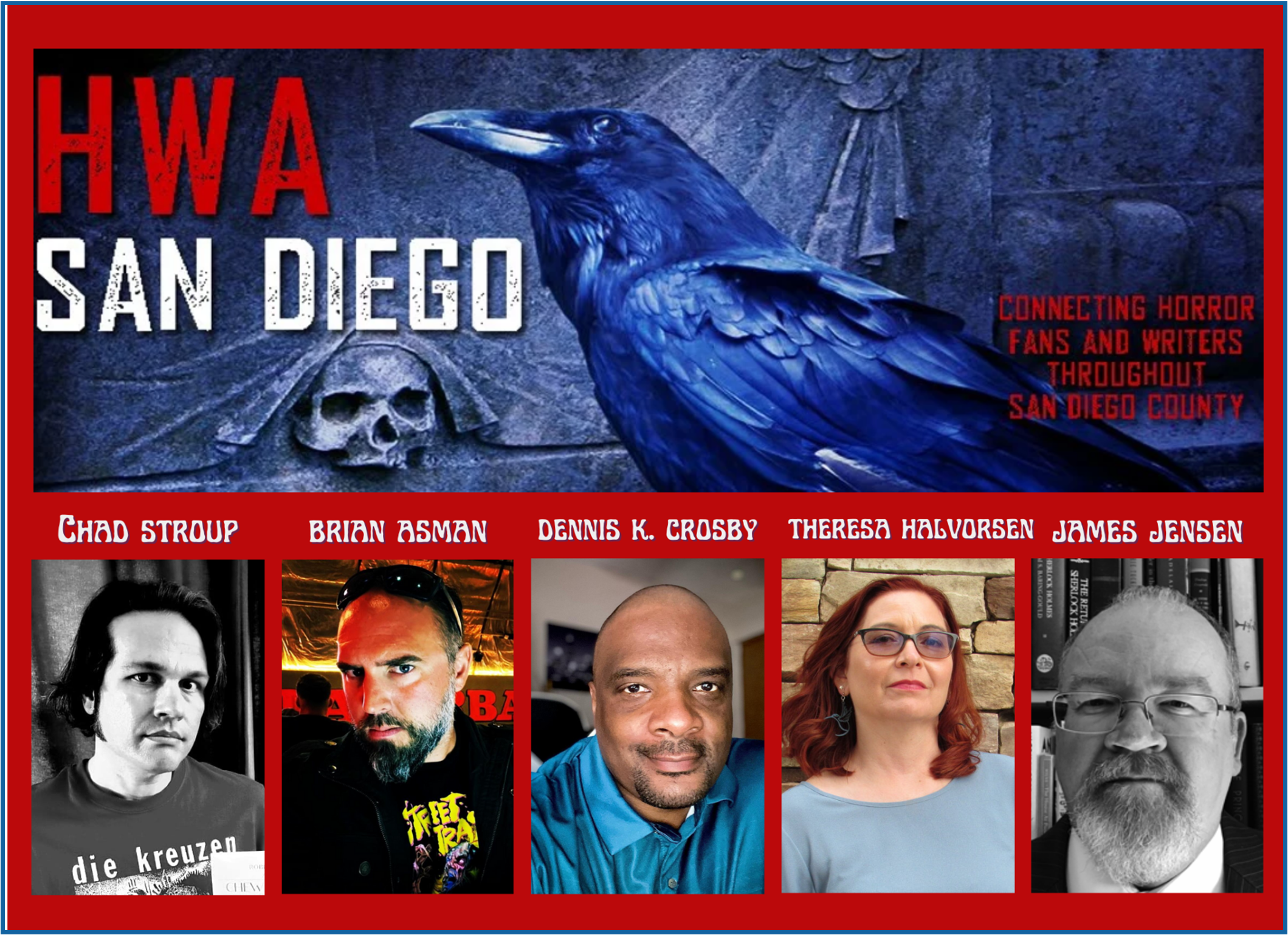 Teens , Adults
Please note you are looking at an event that has already happened.
Registration for this event is no longer open.

The San Diego Chapter of the Horror Writers Association (HWA) and San Diego Public Library present an evening of macabre fun and hijinks with a live virtual panel featuring some of the best horror writers in the San Diego area: Brian Asman, Theresa Halvorsen, James Jensen, and Chad Stroup.

Please scroll down to register.

Here is the Zoom link for this event:

Moderated by Dennis K. Crosby, award-winning author of Death's Legacy, the discussion will cover the horror genre itself and why the authors love it. And we'll find out why each creator enjoys the genre as a fan, and a writer, what books and authors they love, their favorite movies adapted from horror fiction, and what are their screamiest recommendations for those new to the genre.

The HWA San Diego Chapter is a group of San Diego and Southern California based horror writers dedicated to all things macabre in books, shorts stories, poetry, art, and film.  International in scope, HWA was formed in the 1980’s with the help of many of the field’s greats, including Dean Koontz, Robert McCammon, and Joe Lansdale. No matter what stage you’re at in your writing career, the HWA can offer you support through networking, a well-run mentoring program, and communing with its over 1400 members.

Moderator Dennis K. Crosby is the award-winning author of the Amazon bestselling urban fantasy novel, Death’s Legacy and its follow up Death’s Debt. A self-proclaimed geek and lover of pop culture, Dennis is a bourbon loving Chicago Cubs fan and deep-dish pizza connoisseur. He is currently working on his third novel, Death's Despair, and writes weird and creepy short stories in his spare time.

Brian Asman is a writer, actor, director, and producer from San Diego, CA. He’s the author of the hit indie novella Man, Fuck this House (recently optioned by a major streaming service). His other books include I’m Not Even Supposed to Be Here Today, Neo Arcana, Nunchuck City and Jailbroke, and the forthcoming Return of the Living Elves. He’s recently published short stories in Pulp Modern, Kelp, Welcome to the Splatter Club and Lost Films, and comics in Tales of Horrorgasm. A film he co-wrote and produced, A Haunting in Ravenwood, is available on DVD and VOD from Breaking Glass. His short “Reel Trouble” won Best Short Film at Gen Con 2022 and Best Horror Short at the Indie Gathering. Brian holds an MFA from UCR-Palm Desert. Find him on social media (@thebrianasman) or his website linked above.

Theresa Halvorsen has never met a profanity she hasn’t enjoyed. She’s generally overly-caffeinated and at times, wine-soaked. The author of Warehouse Dreams and The Dad’s Playbook to Labor and Birth, in addition to various short stories and non-fiction articles, she wonders what sleep is. When she’s not writing or podcasting at The Semi-Sages of the Pages, she’s commuting through San Diego traffic to her healthcare position. She lives with her supportive husband, occasionally her college-age twins, and the pets they’d promised to care for.

Southern gothic horror writer, James Jensen has been selling other authors' books for over 25 years. His stories appear in California Screamin and Sherlock Holmes and the Occult Detectives Vol 2. While working on his next project, he shares a book choked apartment with his patient wife, faithful Chigi pup Jeeves and a hungry gecko named Freddie. He’s a member of both HWA and the Mystery Writers of America.

Chad Stroup is the author of the novels Secrets of the Weird (Grey Matter Press) and Sexy Leper. He has published several short stories in magazines and anthologies such as Shock Totem, Worst Laid Plans, Chew on This, Forbidden Futures, Chiral Mad 4, Lost Films, and Splatterlands, and his dark poetry has appeared in several volumes of the HWA Poetry Showcase. Stroup received his MFA in Fiction from SDSU. Follow him on Instagram or Twitter @chadxstroup.

Need disability-related modifications or accommodations? Information and program content can be made available in alternative formats upon request by emailing JFRogers@sandiego.gov.